The tiny house movement is huge now as people want to scale down and get rid of waste.

The idea goes against what has been the trend for so long. The bigger the house, the better the life… right?

I look at large homes with sprawling yards and all I see is a bigger to-do list for time that I don’t have to spare.

Tiny home owners have figured out a way to live in a smaller space without sacrificing quality.

I learned that from Ron with the Shiny Tiny Mansion blog. He now shares a 450-square foot mansion with his wife Sue.

“It took me about six years to build it and it’s pretty special,” said Ron.

In the meantime, the furniture maker and his wife lived in a small 40-year-old trailer… with three cats and a dog… in Ohio… for six long years!

If you’ve never been to Ohio, it’s freakin’ cold with an average of 28 inches of snow each year in Columbus. 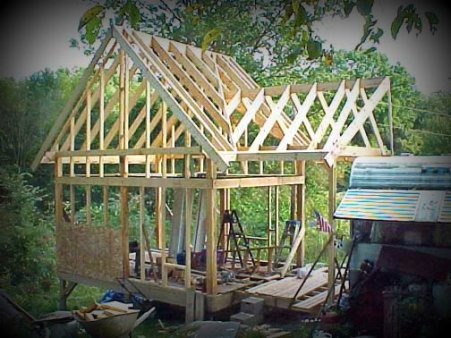 “The idea is to basically just simplify your life so that you can spend more time with friends. Maybe you can afford a nicer bottle of wine.”

“It really is going to be cheaper to build a smaller home, although the skill that it takes is the same as building a large home. You still need to be able to put in doors, windows.. you need to know how to lay a floor.”

“You think that you need all of this stuff, and if you really question yourself some, you realize that it really doesn’t equate to happiness.”

I wanted to know everything about their life. First, how do they get along in such tight quarters?

“Whatever your relationship is, it’s going to be amplified.”

Their relationship has survived and thrived for a few reasons.

“We’ve somehow managed to maintain our friendship and I mean we really are best friends. It probably helps that we’re both pretty creative. We’re both artists and so we always have something to talk about.”

Plus, Ron chips in with every day chores. If you’re a woman, that’s HUGE.

My next question to Ron was about closet space. Sue is a professional woman who needs to dress the part every day.

“She does not have a closet at all. All she has is drawers and shelves.”

Sue keeps a few skirts, several tops and scarves that she mixes and matches. Since she can’t hang much, she irons every day.

The homemaker was willing to sacrifice a closet for room to move around the bed to make it. The days of crawling around a bed, surrounded by three walls to change the sheets, in a trailer were over.

Another potential drawback is in the kitchen. Sue loves to bake and counter space it limited.

“Right now Sue has about two feet, but even that has spices and the coffee pot.”

There are also challenges with storage and space for appliances. They do a lot of smoothies to try and eat healthy and save space with a blender.

“The bigger appliances actually sit on top of our refrigerator and then all of our pots and pans hang from a rack.”

The tiny mansion doesn’t have space for a dishwasher. Sue washes dishes daily and usually stops at the grocery store on the way home.

The homemaker is now writing a book on cooking in a tiny kitchen (put me down for one please!).

What the home lacks in square footage is made up with character and craftmanship. The home is beautiful and built to last. The charming little cottage doesn’t even have any drywall.

The home is worth quadruple what Ron spent on supplies. The attention to detail is even bigger when building a tiny home.

Ron had to think about details that every home builder does and them some.

Click play below to hear what Ron has to say about the tiny homes on wheels and how he saved money on materials.

Many of the homes on wheels are two-story with a ladder up to the loft bedroom.

The couple was willing to take up a little extra space for a staircase.

“We’re in our mid-50s and so we just did not want to climb a ladder to bed every night.”

Another challenge with a tiny home is where to put it. There isn’t an answer in most urban areas.

“You may be able to park one of those in someones backyard for a while, but if you have fairly close neighbors eventually they’re going to complain.”

Ron built their home on 30 acres on his family’s land and created a tree farm.

That means they have to live outside of the city.

“There is a big trade-off of living way out in the country like we do versus living closer to an urban area.”

A trip to their favorite restaurant or concert means they’ll have to drive 30 minutes one way… at least.

Still, Ron recognizes that commutes for many people in bigger cities is much longer.

So, let me sum up my thoughts on the tiny home movement. I’d take Ron’s home in a New York minute. I’d even buy it for the $100,000 price tag if I could choose the location.

Teeny, my little chihuaha-pug and I would be just fine.

As for friends and family… it’s called a hotel, the couch or my fabulous blowup mattress that my brother bought me while I was going though a divorce and didn’t have a place to live.

“People think that this is going to change the world. For some people it’s a good thing, but it’s not going to be for other people. We try really hard to not judge. If somebody wants to live in a big house, that’s fine with us. But, we kind of view the simplicity as more of a mind-set.”

Got something to say? Go for it!